Australia on the horizon!

We spent our last few days in Koh Samui spinning around the Island on a scooter taking photos of sunsets and whatnot! We managed to circumnavigate the island twice which was well worth the scenic views it produced.
The best sunsets were photographed from the south end of Samui and although not the nicest of beaches we’ve visited on this trip it certainly didn’t disappoint when it came to getting a few snaps in. 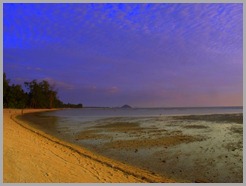 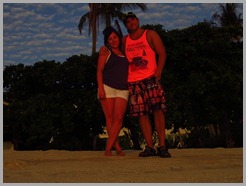 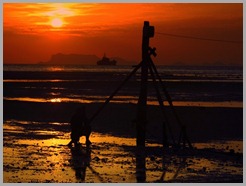 Since I’ve gotten into photography a few years ago, I’ve always been fascinated with sunsets, and so whenever the opportunity presents itself and I’ve a camera on queue, I’ll happily fire away.


Having spent nearly two weeks on Koh Samui, its really been a nice chill out time with zero travelling so to speak. My favourite highlight was zipping around the place on the scooter which we rented for most of our stay there. 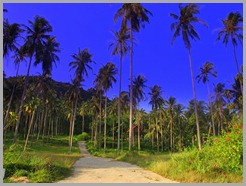 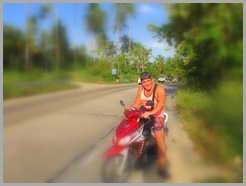 The hotel we stayed in was a real gem of a place in the middle of the Lamai beach area. Again like a lot of the places we’ve found by chance, they are not mentioned in our “up to date” lonely planet guide book. That’s one tip I would also point out…in that your better off finding places on your own and not to trust the guide book all the time, unless you don’t care or you don’t have time. Obviously the researcher cannot stay in every place there is to stay when he/she is getting the info for the guide book and as such not everywhere gets a mention.

This also means that if you look for a place on your own, your very likely to find cheaper accommodation which is also of a much higher standard than the recommendations in any guide book. This is my own personal opinion and is based on previous trips as well as this one.


So our next stop was back to Bangkok via a combination of bus, boat and overnight train. The journey was a total of around 25 hours when you factor in wait times in between train and bus. Again the journey was fine as we had our cabin beds sorted which allowed us to get some shut eye.

I was awoken at our 7am on the train by a dude wearing one of those surgical masks who was ranting in Thai and pointing at my bed. I was still half asleep and so I was convinced that this fella was trying to tell me get up and let him lie down! I ended up just looking at him as if he had two heads and just kept saying “your mental” to him. He eventually gave up and I then found out that he was just the guy who takes the bed sheets from your bed and gets the train ready for the next journey! Oooops!


Arriving in Bangkok we were immediately hit with the steaming humidity combined with about 100 tuk tuk drivers all wanting to bring us to our destination of choice – Khao San road! 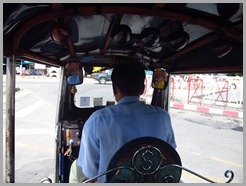 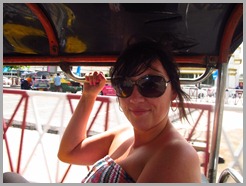 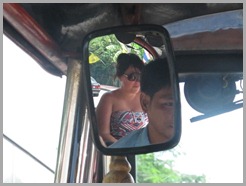 Now most of you know what Khao San road is like if you’ve been there so I won’t get into descriptive detail apart from saying its the Backpacking capital of Asia in my eyes. Backpackers in every nock and cranny. If you don’t have a backpack, then your out of place. 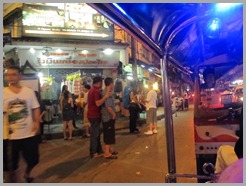 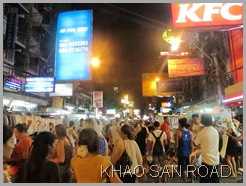 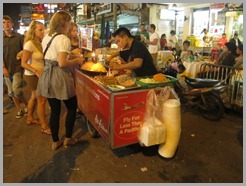 Its basically just one long street that’s filled with all sorts of bars, shops, market stands, food vendors and stalls where you can get a fake student card, driver’s licence, and also a certificate to say your a doctor if that takes your fancy.


Khao San road is like the honey where all backpacking bees conglomerate into one mega hive while in Bangkok.


Food and general items are cheap which I thought wouldn’t be the case since its such a tourist hot spot. In saying that, the tuk tuk drivers and taxi drivers will not under no circumstances turn on their meter for foreigners, so that they can squeeze a few extra baht out of you.


I saw something funny yesterday that I wished I’d taken a photo of. There was this 70+ year old man, tall, back with a freddie krugar type of face walking down one of the side streets of Khao San road. He would have been a tank of a chap when he was young I’d say.
Anyways, he was wearing skin tight shorts with an emerald green t-shirt. He was walking kind of like Vince McMahon walks in the WWE for anyone who knows who I’m on about. A real cocky arrogant walk basically! As he got near I saw his t-shirt say in big writing – HATERS GONA LOVE THIS.


I didn’t pass much heed on him until he walked right past me, when I noticed he had a set of breasts on him that would give Pamela Anderson a run for her money!! I couldn’t stop laughing for ages afterwards. He really didn’t give a hoot what anyone thought obviously! I must also point out that he had no other feminine features about him and he was also a westerner!! Haha……mad cunt!

We are flying out to Brisbane on the East coast of Australia tomorrow(Monday) for our three week campervan road trip. This is the reason for coming back to Bangkok this early, as we had to catch our flights.

Both of us are really looking forward to hitting Oz, as we’ve never been there. It will also be touchdown in the five continents for us which is another milestone on my personal bucket list!
We are going to be staying with a good friend of Florence’s – Deirdre Rynn, who’s kindly offered to make us her guests. So we’ll spend two days with her in Brisbane before picking up our campervan and heading North towards Cairns.
I’ve not done too much research on the Australian part of the trip as we weren’t sure if we were going to go or not up until we booked our flights a few weeks ago. But I’m sure we’ll figure it out as we go along.


One things a certainty, its going to be a hell of a lot more expensive than here in Asia!


So in other news, my corrupted cop of a cousin, David Donnelly has finally given into my propaganda and has booked a week in Thailand. He’s going to fly over just as we are back from Australia and we are going to fly down to Phuket for the week to participate in some social drinking coupled with seeing Koh Phi Phi(where the film the beach was filmed).


I’ve been sending him photos’ like this one for weeks on facebook and generally wrecking his narrow neck! 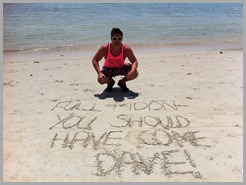 So he couldn’t take it any longer and has booked a trip!

The next update will be from Australia when we get sorted out. Looking forward to living in the back of a campervan for a few weeks and sleeping under the stars!