Well we finally made it over to Asia, arriving in Bangkok Tuesday afternoon local time. It was a long haul to get here especially with the 6 hour lay over in Istanbul to add to the 13 hours of flying time. The flight from Istanbul to Bangkok was an overnight one and the plane was less than 50% full, which was surprising.
About half way into the flight, there was this one gentleman of foreign origin, definitely Asian, who was steaming drunk. I first noticed him when he kept walking up and down the aisle rambling and fist pumping in some sort of rage. He eventually sat down in the seat one row behind me and proceeded to half shout/talk to himself. I didn’t think anything of it until he suddenly started thumping the seat in front of him in which there was a young woman asleep in, using 2 seats to stretch herself out on(due to the plane been half full). The first few times he hit her seat she didn’t seem to wake, but then after a few more belts she hopped up and ran down the aisle to obviously get one of the attendants to do something. But no one returned with her when she came back.
Anyways, he kept this rambling/manic behaviour going for another hour of so until finally he stood up and took off his shirt as if he was hopping into bed! I managed to get a photo of him just to show the state he was in! 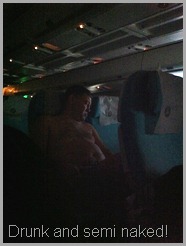 The state of him in fairness. All he was wearing was a pair of shorts! Don’t think he’d get away with that attire on Ryan Air! Well, not without paying extra for the pleasure!
So we arrived in Bangkok and had pre-arranged a transfer to the hotel we booked into to for the 2 nights we were going to be staying in Bangkok. The hotel was only 10 minutes away from the airport which was what we wanted. As we were only staying 2 nights we just wanted to crash and get over the jet lag. 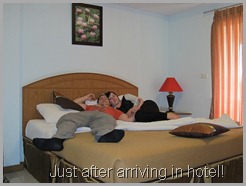 Later that night we ate in the restaurant adjacent to the hotel and enjoyed our first meal in Asia. 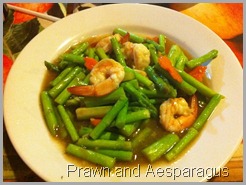 A 17 hour sleep was then had which was badly needed as we were running on fumes. Since the airport was only a few minutes away the noise of the planes landing and taking off were very loud, but that didn’t stop us snoring like eejits!
Our room was more than we hoped for in fairness. At the end of the day all we are looking for on this trip are rooms that are safe and clean. We had enough bed bugs in Africa to last us a life time so definitely want to avoid them this time around.
The shower unit in the bathroom didn’t really function properly, although Flor did manage to squeeze in a nice hot shower when we arrived. Me on the other hand, well I wasn’t so lucky. So out came my 10 litre dry bag which can be used for 101 different things while travelling, and I used it as a portable shower unit

I used a glass as a hose and it did the job nicely…..bear gryll’s style! I didn’t mind if I’m to be totally honest, as its situations like these that all add to the experience of backpacking and travelling in general. 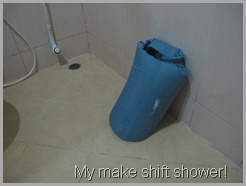 So what do I think about Bangkok? Well since we only stuck our noses out of the hotel twice in the 2 days and that was only to take a short walk around the area we were in, I can’t really give a verdict as we didn’t venture into Koa San Road or any of the other city center tourist spots. So basically we weren’t in the part of Bangkok that many of you will be familiar with.
What I can say is that the people are very friendly and polite which is always a nice thing. I was itching to try some of the local street food which is meant to be legendary but it will have to wait until we return to Bangkok again later on in the trip.
Bangkok has this reputation of been a real smelly shit hole of a spot and while I’m not disputing that fact, I can only say that until you visit some parts of Africa then Bangkok may actually smell quite fresh

!
We plan on returning to Bangkok at least twice before we head home in December so I’m sure the next visit will be a much more in depth experience.
I’m currently typing this blog as we fly to Singapore for our second stop, which will be for 3 days at a wedding reception of a good buddy of mine Sinead O Donnell.
I’ll sign off with a couple more photos from the past few days and I’ll catch ye all in Singapore