Before I forget, the Full Moon blog report is here. I wanted to give it its own blog update, rather than having this update too long. Also I’ve included a short video clip below from around Koh Phangan. 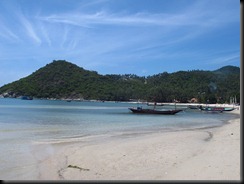 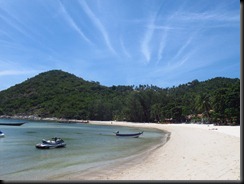 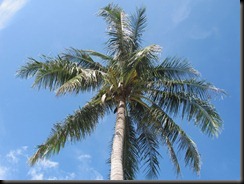 After a long twelve hour bus/boat journey from Patong in Phuket we reached the party island of Koh Phangan on Friday last both exhausted and excited at the prospect of dreamlike white sandy beaches and luscious green jungle forests. And we weren’t disappointed.


In fact, our expectations of Koh Phangan were more than fulfilled. We had pre-booked our accommodation which was a resort right on the beach on the North Eastern part of the Island, an area known as Haad Thong Nai Pan Noi! 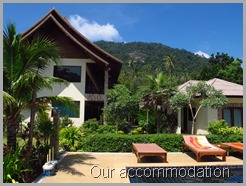 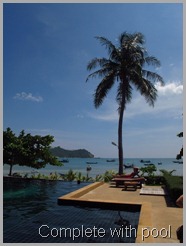 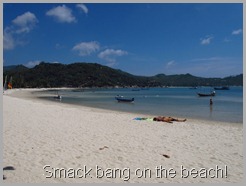 Although Koh Phangan is modernized compared to other islands it still has that rustic and remote vibe to it. Every sunburnt backpacking face you meet around Thailand will instantly tell you about the exotic beaches that Koh Phangan has to offer. And its 100% accurate. Sky-scraping coconut tress, set among ribbons of turquoise white sandy beaches has ensured that Koh Phangan has long held its own as far as the realm of fantasy islands go.


Despite the modernisation of Koh Phangan, it doesn’t have its own domestic airport, which means that travellers can only reach it via boat from either Koh Sumui(which has a domestic airport) or the main land. Not that big of a deal though, as its only hour and thirty minutes on a boat from the main land, and if you got a cheap flight its only half and hour away from the hussle and bussle of Bangkok!

Our first few days on the island entailed lazing around the pool and beach which guaranteed that we all got roasted red raw. I’ve never applied so much suncream over a short period of time and still it wasn’t enough to keep the rays at bay. The heat at one stage felt just as hot as it does in Vegas. One tip I would give anyone coming out here regarding the sun is to pack as high a factor as you can, because 1) they don’t sell much highter than factor 20, and 2) its quite expensive to buy sun cream here. 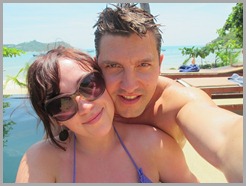 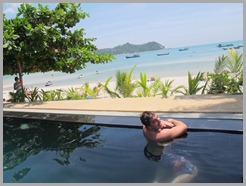 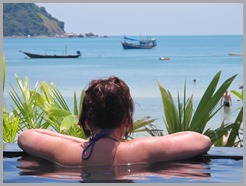 Myself and Flor went kayaking one of the days with the intention of spending two or three hours out on the sea but lasted only forty minutes due to the currents been that be too strong for non swimmers like us and also the heat was just sizzling our skin. Even though we had life jackets on us, we didn’t feel like it was worth the risk of overturning the kayak in the choppy waters. 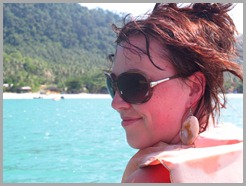 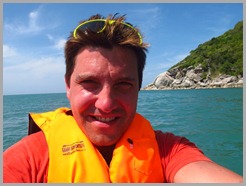 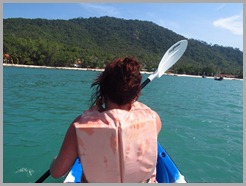 On Tuesday, we went on an all day tour which included elephant treking, a crocodile show, snorkelling and a waterfall visit. This was a pretty awesome day which gave us one hell of a scare while trekking on the elephants!

It started when I was told I’d be sitting on the elephants head and the two girls would be on the seats on the elephants back. Fine, and it was no problem at all and was a pretty cool experience. The elephants are such a gracious creature and even when going down a decline, he would flap his ears back so as to squash my legs(not at all sore), in order to make sure that I didn’t fall over. As I was on his head I’d nothing to hold on to, so this was a nice gesture on behalf of the elephant!


So that was dandy, until we were on our way back to the camp. Just a few hundred feet before we reach the camp, as we were literally passing the crocodile pit on our left(which hosted at least five or six beasts) all hell broke loose!

The elephant that was only a few feet in front on us suddenly went crazy and started making that noise it makes(don’t know if that noise has a name, but its the elephant noise from its trunk)! He then turned and started charging towards our elephant which went equally bezerk and started going ballistic. He did a 180 degree turn in one motion which had us all screaming as we didn’t know what the hell was happening, and then started to charge back up the extremely narrow, uneven path we were on. All this while tree’s and branches were smacking us in the face and me with nothing to hold on to only bloody head of the elephant. The girls were in an equally dangerous position as they were thrown around on the seats and only for they managed to hold onto each other they would have fallen off and been in a world of trouble.

I was holding both my phone and camera when the incident happened so I was forced to grab onto the bushes and branches that the elephant was running through as I really believed that it was only a matter of time before I fell off.
The guides were yelling at the elephants and shouting at us to be calm while it happened but calm was far from what we were! 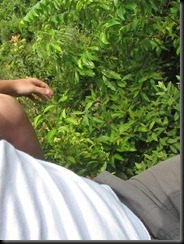 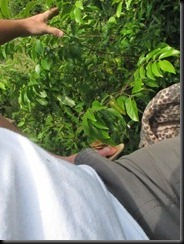 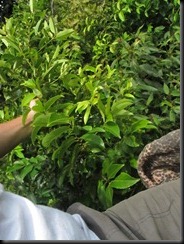 Somehow I took these photos during the incident. Finger must have been pressing the buttons by accident. You can see my hand reaching and grabbing for anything to help keep me balanced!


So what caused the commotion in the first place I hear you ask! Well, as soon as it happened my instinct told me that it was a crocodile on the path that had somehow escaped from the pit we were passing on our left. I was full sure of this as the elephants had gotten such a big obvious fright. All I could think was if I fall off this thing I’d be either mangled by crocs or trampled on by the elephants….either way not good thoughts to have spinning through your mind as you fly through the trees like Tarzan on heroin!
Anyways, it turned out that a little brown horse had come onto the path and gave the first elephant a fright, as horses aren’t usually common around that area.


A fucking horse!!! A horse the size of a child had caused the elephants to go insane with fear and as a result nearly caused us heart failure. When we learned of this, we nervously started laughing in relief, but it still didn’t stop the legs from shaking goodo for a few hours afterwards.


The girls were equally as frightened as they had no idea what was happening. All I could hear was “oh god, oh god” and screams, and all they could hear from me was “oh shit, oh shit”!

So after we got back to the camp we regained some composure before watching a crocodile show in which a man proceeded to taunt the crocs who were obviously under some sort of medication into allowing them to let him put his hand and head into their mouths!


After that we were entertained by a baby monkey who came over to our table as we were having a drink and started to play with us. He was so funny as he started drinking coke from the can and eating a banana, both of which were bigger than him in size!! 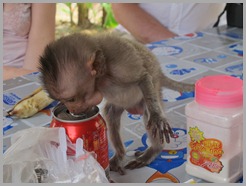 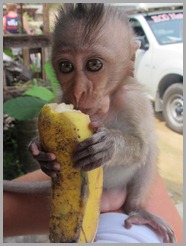 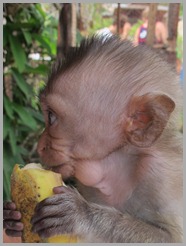 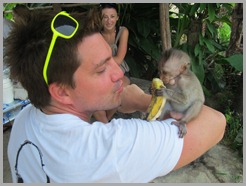 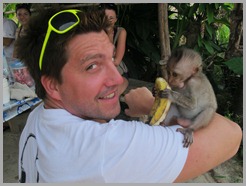 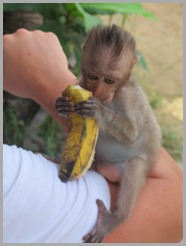 So its six days since we arrived in Koh Phangan and we are still here sunning it up. We are going to move to the west coast of the island for a few days on Thursday.
As I said at the start, I’ll giving the Full Moon Party its own blog entry which will have all the photos and information about it there. 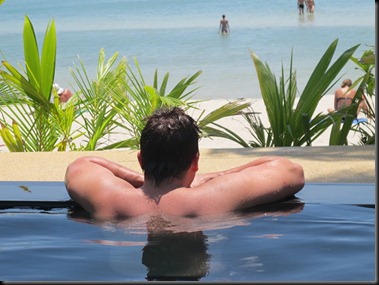