Not long left in Africa! 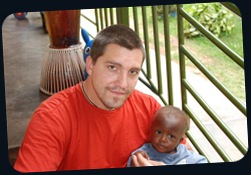 We’ve entered the final third of our African adventure, and have only another day left here in Kampala, before we make the eight hour journey south and across the border into Rwanda.
We go to Sanyu babies home tomorrow for the last time before we leave on Tuesday.

The three weeks that we’ve spent in Kampala have been magnificent. We met so many nice people of all nationalities including Irish. We’ve seen so many sites and activities, some which were amazing and others which were very hard to witness.

But the one experience that we will take away from our time here and the one that will stand out the most, is our volunteering time spent in the orphanage. Its difficult to describe what’s its been like. Words or even photo’s wouldn’t justify my thoughts to the extent I’d like to express.
All I know is that after seeing so many poverty stricken, helpless, starving orphans both on the streets and in the orphanage, that I realise how lucky I’ve been in life.
It doesn’t bear thinking about how some of lives of the kids in the above photo’s will turn out. Some of them were so badly malnourished when they arrived in the orphanage that the damage done already both mentally and physically would hinder any chance of leading a normal life.

Last week a little six/eight month old baby boy was found near the orphanage, abandoned on the side of a road. Left to die and fend for himself the boys cries were thankfully heard by someone who brought him to Sanyu babies home. They called him Benjamine. This is him;

Another example is of a little girl called Martha. A similar story as Benjamine’s only that she was two years old when she was picked up and brought to the orphanage. She’s been there six months. She is so fragile, weak and small that would you hardly think she was two and a half years old. Her arms,legs,fingers are the size and skinnyness of a new born baby. Come dinner time and she’s in a league of her own. She wolfs down whatever’s in front of her and does so in such a cute manner that its hard not to smile. Here’s a few photo’s of Martha;

This are just two examples of thousands of cases like this throughout Kampala alone. Its hard to imagine what it must be like.

Just now as I type this in our apartment, we hear kids screaming outside. We look to see whats going on. About seven or eight street kids are there begging on the road, with one girl in particular crying. We don’t know why she is crying, but her dress is half ripped off her back and she has no shoes(like the rest of them). God only knows what she’s frantic about, in a part of the world where gang rape is not only common, but a sad harsh reality of street life for these poor unfortunate kids.

I’ve also include two photo’s below which I took of what the streets here in Kampala are like concerning poverty and kids begging. These two photo’s were taken discretely, because I wanted to remember what it’s like for these children who live here. I have other photo’s but they would not be appropriate for posting up on the internet in my view. 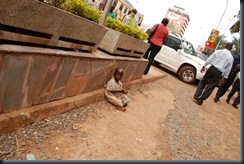 As I said earlier, words or photo’s don’t convey accurately the conditions here. You would have to experience it for yourself to really understand it. And even then you’d come home at night and wonder how unfair life is to some people.

So it’s off to Kigali in Rwanda next week for the last portion of our trip. We have to meet with the Irish embassey there when we arrive and sort out a placement with an orphange.

Genocide took place in Rwanda back in 1994 as ye all know. The effects of which are still very prevalent on the streets there we were told. We don’t know what to expect in Kigali but I presume it would be much the same as Kampala…maybe worse, who knows.

I’ve a few stories/observations from our three weeks here which include:

But I’ve save them for another post in a few days.

So my next post will be from Rwanda hopefully. Not looking forward to the eights hours on the bus but that will be nothing compared to the mammoth journey that we will have to take to get back to Dar es Salaam on the east coast of Tanzania to catch our flights back home!! Horrible thought, but I’ll end with a quote about travelling abroad…..

”A man travels in search of what he needs, and returns home to find it”!