Happy St.Paddy’s day to everyone back home. I hope the day is good for the parade and that the guinness tastes even better!

We had our own celebrations for paddy’s day on Friday night last. We met a girl from Sligo who is working up in Northern Uganda as a volunteer and she informed us of the Irish embassy’s paddy’s day celebrations here in Kampala. So the three of us went to the football game that was organised for Friday evening between the Irish and the English! This is an annual game that has been going on for the past five years and is sponsored by “bubbles O’Leary’s” Irish pub. The Irish won of course 1-0, but the game was anything but friendly, as you could imagine. A few heated moments and one of two Irish hotheads made the game all the more enjoyable to watch :)! Anyone could sit down on the Irish bench and play if they had shorts and trainers…both of which I didn’t have with me unfortunately. It would have been a laugh to pull on a green O’Leary’s T-shirt! I forgot to even bring my camera so I don’t even have any photo’s.

So that night the three of us headed to O’Leary’s, where there was a ticket only party going on, complete with free Irish stew, an Irish band from Galway(that was flown especially over for the weekend) and free guinness!! There was Irish everywhere, was great to mingle and everyone was in great spirits. I decided that I’d drink guinness for the first time ever….I’ve tasted it before and hated it. So I necked three pints of it and it was lovely! Really liked it. But I left it at that, as I don’t fancy having anything that resembles a hangover here, especially with the heat. Plus I said that I would’nt go on a session until I get back home.

The craic was great in the pub, which had a big outside area as well as inside. The band were very good and played all the usual songs. You’d find it hard to believe that you were in Africa inside that pub as all the pub was exactly like an Irish pub. The furniture was shipped over from Ireland when the pub was been built, so it really did make for a good Irish atmosphere. We left at 1am but the party did’nt stop until the early hours we were told. There was also an official formal ball on the Saturday night as well as another party in the Irish ambassadors house in Kampala on Sunday, but we did’nt go to either of them as we would definitely had a mental hangover!

Here’s a few photo’s from the Friday night. The plaque that you see in the photo’s is the one the Irish team got for beaten the Brits! 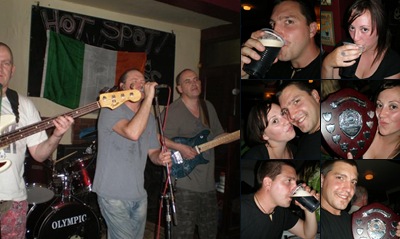 So Saturday morning we decided that we would get the bus to Bujagali falls, which is a two hour bus journey away and stay the night there.
Bujagali falls is like a mini tourist resort and has bungee jumping, the worlds deadliest white water rafting and loads of quad biking adventures. From the photo’s below you can see a few grade 3 rapids in which you’d pass if you did the rafting. But there are loads of grade 5 rapids that are further down the river.

We wanted to do a full days quad biking, as that way we’d get to waste away a day and plus we’d get to visit loads and loads of small little villages and settlements that dotted the surrounding area. So Sunday morning we got kitted out and off we went. I’d a manual quad and Flor had an automatic. Our guide for the day was very friendly and we had a blast. We went to various town’s and villages and around every corner there were loads of kids running and waving at us. It was a very surreal experience with all these children running around the quads and shouting “how are youuuuuuuu”. Whenever we stopped for a break or photo’s, we were mobbed by the local children…who were fascinated with both our skin colour and our quads. I presumed that white people did not pass through their villiage that often.
The scenery was quite amazing to be honest, like something you’d see in a movie. Lush green fields with banana trees one side, pineapple and mango tree’s on the other and the brown copper coloured dusty road in the middle. A text book photo of Africa in my opinion. There was no better feeling that flying along those roads waving a the friendly locals and sensing the hot wind blow over the skin. A brilliant day and it lasted from 8am until 6pm! Needless to say the dust and dirt totally covered us from head to toe. Like pigs in shit as they say 🙂 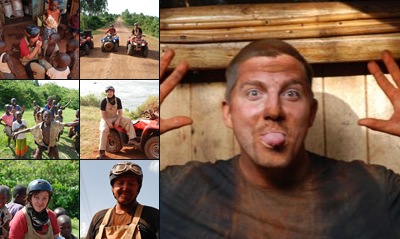 We also went for a short boat ride Saturday and visited the source of the River Nile. Its the spot where the water from Lake Victoria pours into the river Nile and begins its 6200km journey up through Uganda, Sudan and exits into the Mediterranean sea in Northern Egypt. There’s nothing spectacular about the source of the Nile, just a plague or two and a few shops etc. Worth a photo or two though to say you were there… 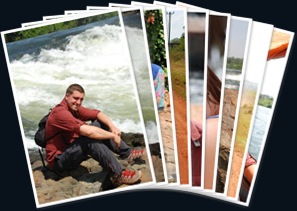 So it was a busy weekend for a change, and a welcomed change it was!

Enjoy Paddy’s day all and I’ll have another update in a day or two.