Patong – Land of the He/She’s! 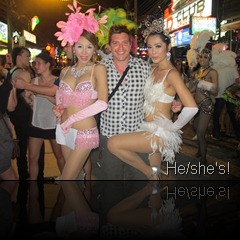 We landed in Phuket from Kuala Lumpur on Tuesday afternoon for three days which started and ended with some drama. We got a taxi from the airport into Phuket town and when we got out of the taxi Aileen discovered that she hadn’t her purse! Panic quickly set in as she had all her money cards and cash in the purse which would lead to a lot of potential trouble. We had gotten a random taxi and she was pretty sure she’d left it in the taxi when she got out. Long story short, I’d luckily kept the receipt(which contained all the info) for the taxi when I paid and so we got the local tourist office to ring the cab office and they were able to get in touch with the driver to check the car and return the purse to us, which he kindly did! Could have been a hell of a situation if the taxi driver wasn’t so honest. He could have easily said there was no purse in the cab and pocketed the money.


So we decided to hit Patong beach on the West coast of Phuket for the three days. As most of ye know, Patong is the main buzzing spot in Phuket with party nights every night of the week.
Patong was also the worst hit part of Phuket when the 2004 Tsunami struck. The resort was more or less completely wiped out and had to be rebuilt from scratch. The reason why Patong was the worst hit, was because of the topography of the land. The beach where all the footage on youtube can be seen is five minutes from where we were staying. 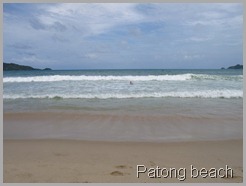 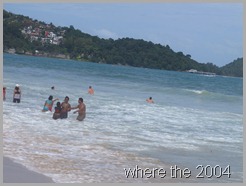 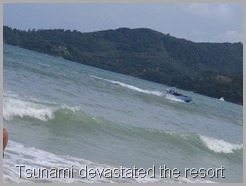 While lying on the beach it was hard to imagine the devastation that happened here seven years ago. I remember watching the footage on youtube back then thinking how crazy the whole disaster was. 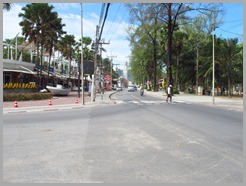 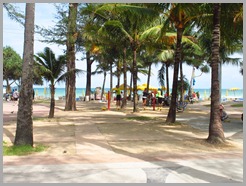 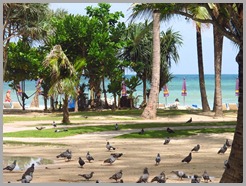 So we lounged around Patong and checked out the local markets and shops. We also had a Thai massage which was well worth the hour it took. Getting walked all over never felt as good! The touts on the street can get very, very annoying with their constant nagging about “want to eat”, or “want a tuk-tuk”(local form of transport). Also, when you go into a shop to buy something you get pestered a lot as they will try and sell you anything. I did come up with a few ways to prevent them from asking us more than once if we wanted to eat in their restaurant. And that’s simply to say that you’ve already eaten! Whether true or not is irrelevant, as they have no comeback! Although a few of them then say “maybe tomorrow, or day after tomorrow”!


You can also go into a shop and pretend you want to buy an item that they don’t have! For instance I was looking for a pair of shorts the other day and I went into a shop in which I was surrounded immediately by the guy looking to sell me a pair. I saw that they had none with pockets on the sides(cargo style) so I said to him that I was looking for the ones that had the pockets, to which he said he didn’t have any, which I already knew. So I pretended that the ones he had were not what I was looking. In the end I bought a pair acting like I didn’t want them at all, but I got them for like 5 euro’s compared to the 12 they were marked down at. They don’t want to lose any business if they can and they will come down to your way of thinking if you let on your not interested if the items they have. This works for me anyways. My haggling skills, while getting much better, are not to the level that others may possess! 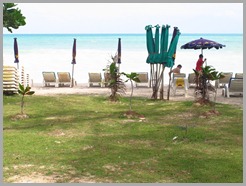 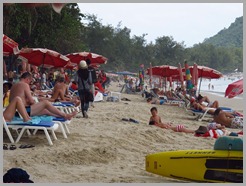 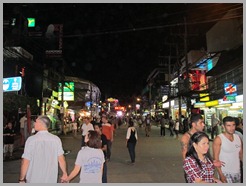 Bangla street in Patong is renowned the world over for its “activities”. You only have to again check it out on youtube to know what I mean. We saw the widely accepted sight of old western men walking hand in hand with teenage girls.


The men obviously head to Patong and other similar places in Thailand for this “Girlfriend experience”, in which some of them get the “wife experience”, then a few get the “divorce experience” before heading home a few months/years later with the ultimate “I’ve got no bloody money experience”! This is very true in a lot of cases. Some of the men are so taking in by these women that they send them money each month from back home, so as to keep them not only off the streets, but also to keep them as their girlfriends! Please!! I mean how gullible are these guys? You can be 100% HIV positive that each of these women have ten or more men on the go at one time, each getting their monthly cheque in the post from each. This is a FACT!.


But in spite of the obvious sleaziness’ that goes on in Patong, its really a super little place. Endless activities and things to do insure that its still a modern tourist hotspot.
Patong is also famous for its “ping-pong” shows and ladyboys. The he/she’s as I like to call them are everywhere, from working in shops, bars, restaurants to even just walking down the street dressed as a man, but you know they are he/she’s as they have the implants and the long hair.
A lot of them need a second look to actually detect if they are he/she’s. Obvious signs apart from the masculine physique and voice are; enlarged features such as Adam’s apple, hands, feet, and breasts! There has been more than one occasion where you’d have to take a 50/50 guess as whether or not they are he/she’s or not as its impossible to know.


I’ll leave ye with a short clip from the few days in Patong.