What You Need To Know About Ping Pong in Patong 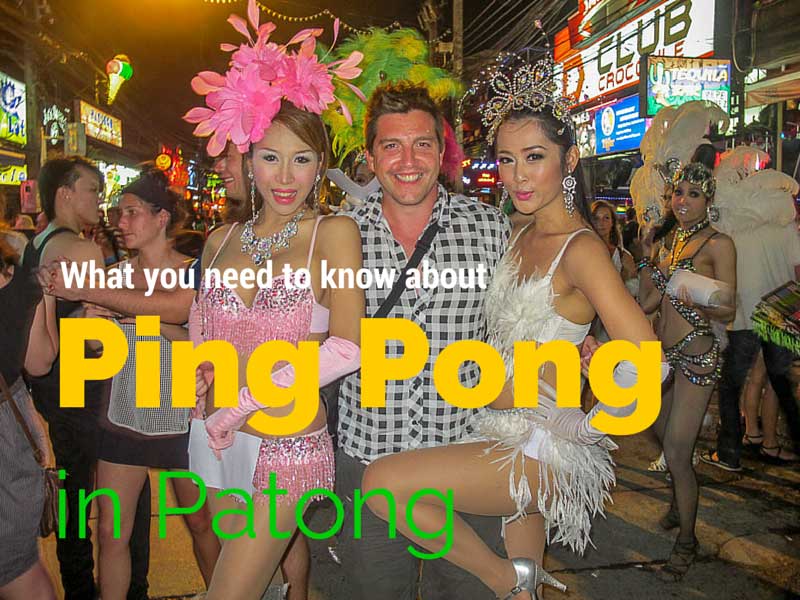 If you travel through Patong’s famous “walking street” – aka Bangla Road – after sunset, it’s inevitable that you’ll be set upon by all sorts of hustlers and fast-talkers trying to tempt you into one of the many bars and shows to watch women gyrate and buy drinks at inflated prices.

Actually, scrap that…judging by our experience, you’ll be hounded both day and night in Patong!

If you like to be left alone for a leisurely stroll through the markets and want to know where to stay in Phuket, our advice is to stay as far away from Bangla Road as possible.

Kata Beach is our favourite beach in Phuket and there are some amazing properties to be found on Airbnb in Kata Beach so our advice is to book ahead and you’ll get a great deal on a luxury rental.

Many of these bars are simple strip joints or pole dancing clubs where a woman will swirl on and around you for a few Baht (or dollars, depending upon what you have) but some are more scurrilous still. Of all the shows and nightlife available in Thailand, none are more graphic than the outrageous and downright bizarre Ping Pong Shows.

What is a ping pong show?

What’s a stark contrast to what springs to mind when one mentions ping pong games, these particular shows are hugely popular in Patong, Bangkok and maybe one or two other cities around Thailand.

Generally taking place in the city’s strip club areas, these sex shows usually consist of local women using their pelvic floor muscles to retain and eject a variety of objects from their vaginas. While many of the objects are unsurprising – ping pong balls being a staple – others can be more than a tad more whince-worthy and may include chopsticks, darts, and razor blades (yep – I did just say razor blades!!)

My description of the show or anyone else’s will not be able to convey what the experience is like. It’s one of those things that has to be seen to be believed.

The ‘fun’ doesn’t stop at inanimate objects either. Many of the Thai girls – most of whom are pretty small in stature – will cram goldfish or Sapgreen Stream Frogs, which are indigenous to the city, into themselves to be expelled into a bowl of water some time later.

A whole evening’s entertainment can be made of drinking beer while watching a girl pop balloons at what I would call a respectable distance, using only darts and the power of her pelvic muscles.

It seems that anything goes, and if it can fit, it will fit with a little easing and some KY jelly.

The neon lights are bright, the music is loud, the crowds are boisterous, and the drinks are expensive but these shows are an experience not to be forgotten; it’s a kaleidoscope of sensory overload that would make even Marquise de Sade blush.

Thailand has a reputation for being a hedonistic sexually-liberated paradise for the traveler, but nothing can prepare you for this.

I’ve heard many people say that they’ll never be shocked again having visited the NieuwMarkt area of Amsterdam. I say to those people, come and see a Ping Pong Show in Thailand, and think again!

The Foreign & Thai Girls that Perform

While the girls are all mostly prostitutes, many of them might secretly dream of a career in theatre. Sticking a frog or a razor blade inside their private parts may not be the most pleasant experience, but they do it with a smile and a cheerful abandon that makes it seem like it’s really not that bad.

Of course, concerns are raised all the time that the girls are coerced into it and there are even charges that some are Vietnamese and Laotian sex slaves who have been smuggled across the border, but the government chooses not to intervene in one of the country’s most profitable industries.

How much does it cost to get in?

There are a few different shows on Bangla Road so each may differ in terms of how much it costs to get in and the length of time that the show lasts for.

Most of them advertise the show as ‘free’ to attract the attention of passing tourists BUT (and there’s almost always a ‘but’ when something is free in Thailand), what they don’t tell us is that a bottle of beer is €20 and each person MUST buy at least one drink.

Minerals and bottles of water are similarly priced and spirts are way more expensive.

The girls will also do their rounds after each segment of the show with a tip bucket and they’re not afraid to stand in front of people and wait until something is put in. I got the feeling that tips are how the girls earn their night’s pay which is sad.

The show we went to lasted for an hour.

Yes, the girls do need members of the audience to get involved in the show and things can get VERY graphic very quickly!!

If you’re with a group of guys, you can almost be certain that one of you will be targeted to join the girls on stage for a lapdance or some balloon popping.

We weren’t approached (thankfully!) as we went as a couple and we avoided eye contact with the girls at all times when they came searching for their next victim.

Should you go and see a ping pong show in Patong?

Ok, we’ve been so we can’t judge and tell you not to go. Curiosity killed the cat and we gave into what seems to be the main attraction on Bangala road.

But, what we can do is share our feelings about our experience.

Yes, it was eye-opening (to say the least) and need I say, we were somewhat entertained at the time as we just could not believe what was happening on the stage before us.

Having not experienced anything like this before on our travels, the shock factor definitely affected us and our night out at the show had us talking about it for weeks afterwards.

Having left the area of Patong and Phuket behind, we’ve since explored many other areas of Thailand that, to us, are far more interesting and worthy of our time.

While we can’t discourage you from going (as we did it ourselves), we can tell you about the feelings that we have upon reflection of our ping pong in Patong experience.

Years have passed since we went to see one of the most popular ping pong shows in Phuket and we don’t think about how great of a night out going to see a Thai girl shove objects inside her would be.

Instead, we think about those girls having to degrade themselves in public for the entertainment of tourists – and all for very little pay.

We think about the poor innocent wildlife that is used in these performances. Yes, it’s completely shocking to see a girl put a frog in her vagina, but it’s even more shocking that people actually pay money to see these poor creatures being treated in this inhumane way.

On the surface, it’s all fun and a ‘must-do’ thing when visiting Thailand but once you begin to dig a little deeper, you’ll begin to realise that there’s so much more going on behind the scenes that some tourists don’t know about.

I’ve also heard stories about tourists getting scammed and robbed so be extra vigilant when it comes to what show you choose, who you go with, where the club is located (avoid the backstreets), and how much alcohol you’ve consumed before going to the show.

So, will you go to see a Thai Ping Pong Show?

If you’re looking for a very ‘different’ night out with your friends/partner in Patong and you don’t mind supporting an industry that has been linked to human trafficking, prostitution and animal cruelty, then go for it.

But, be warned, you may regret it and spend the next few months/years wanting to unsee what you’ve seen!

If you’re the kind of person that couldn’t sleep after knowing that you contributed money to an industry that’s known for all of the things mentioned above, a ping pong show most definitely isn’t the place for you.

Ultimately, the choice is yours but we’ll not be returning to a ping pong show in Thailand (or anywhere else for that matter) anytime soon.